Happy, merry, joyous holidays to one and all! December is filled with holidays that are near and dear to many of our employees and their families. Whether you celebrate Hanukkah, Christmas or Kwanzaa, this wonderful time of year is centered around family, feasts and traditions. 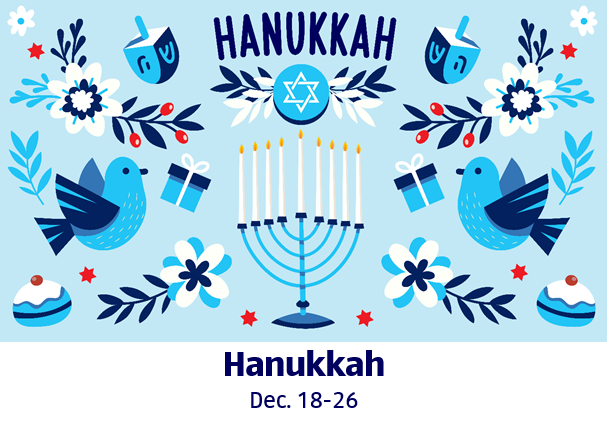 Hanukkah is an eight-day Jewish celebration often referred to as the Festival of Lights. Observers light a candle each day of the festival to celebrate. 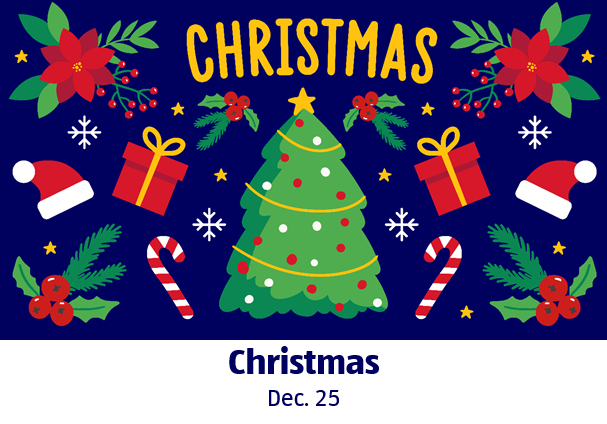 Christmas is both a sacred observance and secular holiday celebrated worldwide. Popular customs include tree decorating, gift-giving and cookie baking. 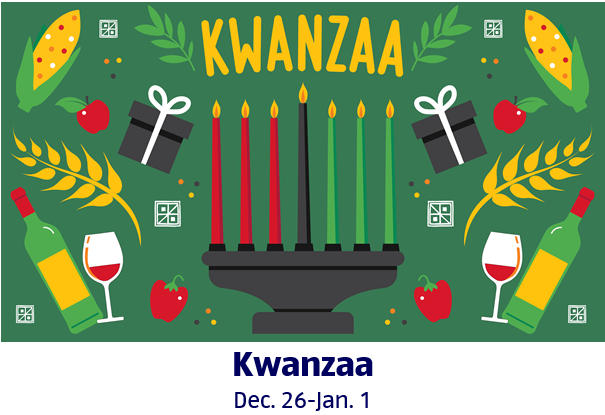 Kwanzaa is a weeklong holiday that celebrates African culture. It is inspired by African harvest celebrations and commemorated by candle lighting.

Today, there are over 570 Native American tribes and nations across the United States! These federally recognized sovereign nations each have their own distinct cultural traditions, governments, languages and practices.

Here are some of the ways you can celebrate Native American culture:

From September 15-October 15, we recognize National Hispanic Heritage Month and commemorate Hispanic and Latino cultures and contributions. The month celebrates the cultural richness of Hispanic and Latino people, including those with origins in the Caribbean, Central America, Mexico, Spain and South America.

The celebration is split across two months because the timing coincides with the Independence Day celebrations of Costa Rica, El Salvador, Guatemala, Honduras and Nicaragua.

Over the next few weeks, take an opportunity to embrace and explore Hispanic & Latino heritage and traditions. Check out the ideas below to inspire your celebration of Hispanic and Latino culture.

In June, we celebrate Lesbian, Gay, Bisexual, Transgender and Queer+ Pride Month, also known as Pride Month. It’s a time to recognize the impact that LGBTQ+ individuals, advocates and allies have on history in the world. LGBTQ+ Pride Month has blossomed into an international effort to highlight the LGBTQ+ community. The movement represents achieving equal justice and opportunity for LGBTQ+ members.

Whether you’re a member of the LGBTQ+ community, consider yourself an ally or want to learn more, check out ways to get involved / celebrate Pride this month:

Educate to become an ally. Regardless of your sexual orientation and gender identity, you can be an ally to the LGBTQ+ community. An ally is someone who helps and supports the inclusion of people, groups and identities through their behaviors and actions, although they themselves may not be a member of that group. Check out The Trevor Project’s Guide to Being an Ally to Transgender and Nonbinary Youth.

Learn the history. From the first gay rights organization in 1924 to expanded gender markers on U.S. passports, discover these LGBTQ+ milestones in our country.

Support LGBTQ-owned businesses. Our country has an approximate 1.4 million LGBTQ-operated companies per the National LGBT Chamber of Commerce. Find one in your neighborhood today!

At ALDI, we encourage you to be authentically you. Check out the below resources and support for LGBTQ+ community members:

June 19, 1865, now celebrated as Juneteenth, stands as the day federal troops marched into Galveston, Texas, with news that the Civil War was over and those enslaved were now free. We celebrate Juneteenth to commemorate this moment in history.

The History of Juneteenth

Though President Abraham Lincoln declared the Emancipation Proclamation, decreeing freedom for those who were enslaved in the Confederacy, on Jan. 1, 1863, many people remained enslaved due to a lack of Union troops and the limited reach of the decree.

The impact of this was especially felt in geographically remote Texas. This all changed when General Robert E. Lee surrendered in April 1865 and Major General Gordon Granger and his troops arrived, overcoming the barriers to freedom.

With Gen. Granger’s reading of General Order No. 3, 250,000 enslaved Black and African American people in Texas were freed. Celebrated as “Jubilee Day” the following year, Juneteenth was born and became a yearly celebration.

The Juneteenth flag flies with significance — read on for its symbolism!

Reflect on Juneteenth. We encourage you to honor this day and contemplate the freedom that it represents.

Donate to our partner UNCF, whose mission is to support underrepresented students to become skilled college graduates. ALDI has been a proud partner of UNCF since 1991, donating over $1 million to date. Our contributions have typically supported student aid grants, scholarships and special events.

May, officially designated as Military Appreciation Month, is a special time for active-duty and veteran individuals and their families. During Military Appreciation Month, we salute the service and dedication of active, retired and reserved members of the U.S. Air Force, Army, Army National Guard, Coast Guard, Marine Corps, Navy and Space Force as well as the support of their spouses and families.

Send a card or care package to an active-duty member of the armed forces.

Pin a poppy for our fallen soldiers.

Check us out on Social Media - @ALDIUSACareers